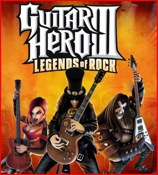 After playing guitar hero at my brother’s house, Paul decided we needed one. I agreed, since Paul really hasn’t bought much for the Wii. At first I was reluctant to play, as I don’t have much in the way of rhythm. Paul finally convinced me to play and threw the guitar at me. It was a horrid first experience, I didn’t realize you had to push down the note and strum at the same time! I know, it should of been obvious. After I got kicked out of the song 15% of the way through I vowed never to play again.

Two days later I gave it another shot and this time I started with the easiest song. Ever since then I’ve been hooked. Paul and I have played at least an hour every night. Thursday night we went to the BYU football game and every time they played a song over the loud speakers I thought of guitar hero! For the past week I’ve gone to bed with guitar hero songs running through my head. I decided these are signs that I am defiantly addicted!