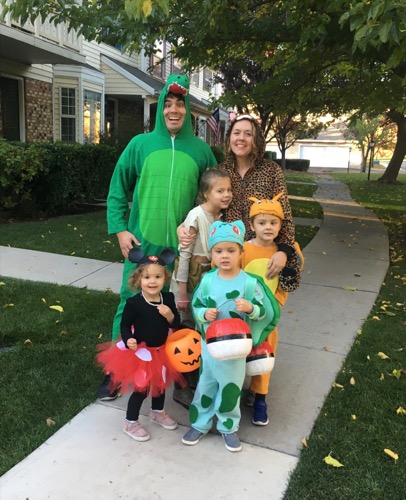 Candy, parties, dressing up, and trick-or-treating are just some of the reasons. 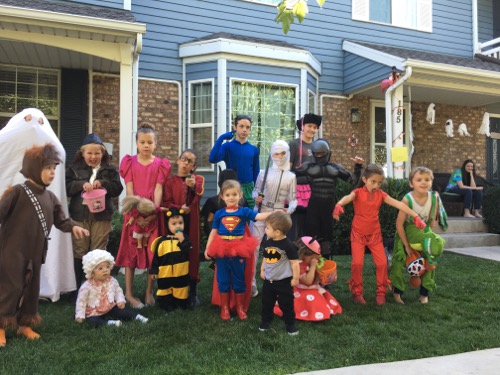 We started out the festivities with our annual neighborhood carnival. 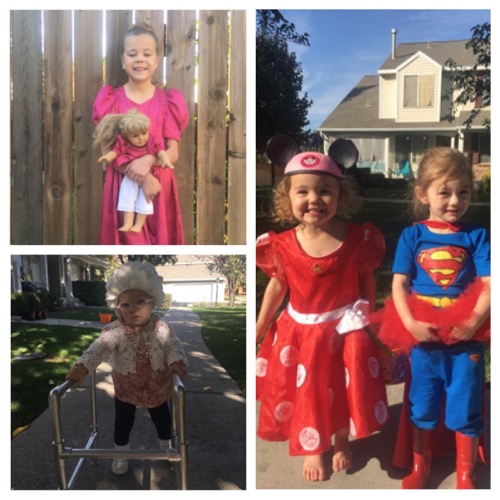 I never let the kids wear their actual halloween costumes, as they always end up spilling something. So, I send them to the dress up tubs. Crew was Chewbacca, Miles Dino rider, Ruby Minnie Mouse, and Macey wore an old ballet costume I wore in the nutcracker with Kirsten in a matching dress (my mom of course made them.  She’s got mad skills).  And I had to include a picture of Emery in her adorable old lady costume.  She was the cutest thing ever. 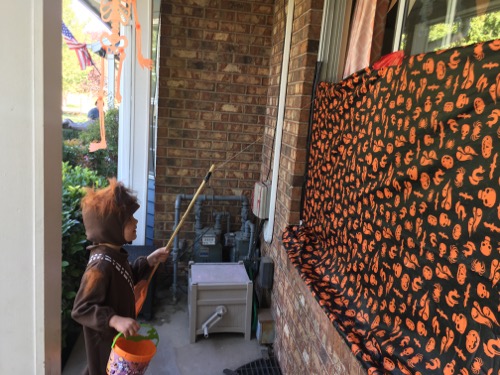 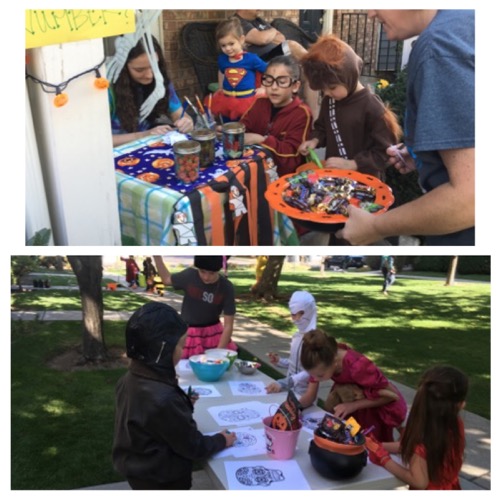 Next up was Fright Fest. 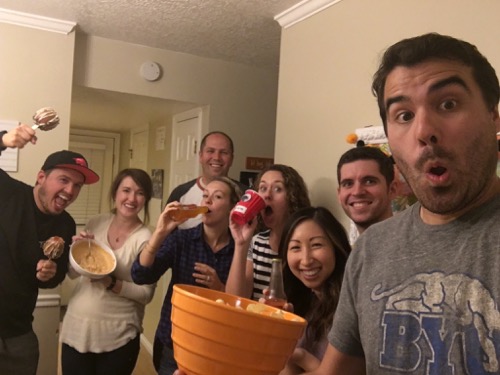 It was our turn to host.  We decided to play a Mormon drinking game. 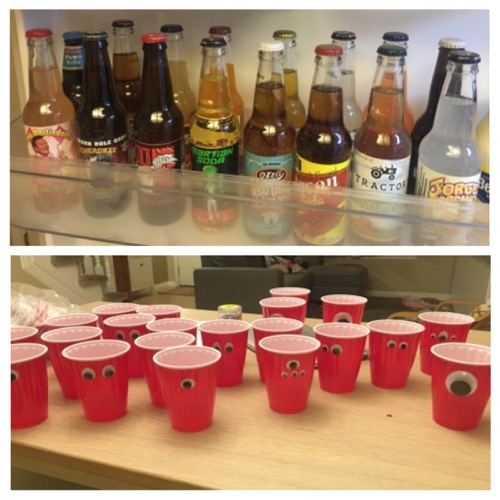 We got a bunch of different sodas.  Some gross (peanut butter, bacon, hot wing sauce), some good (rootbeer, butter beer, horchata) and LOTS in between. 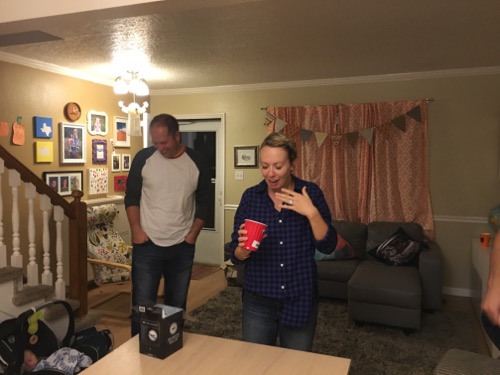 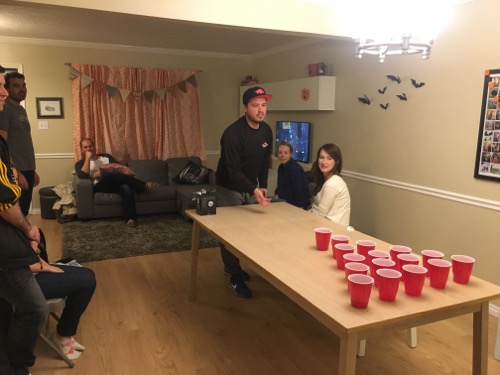 It was highly entertaining and after sampling all of them I deemed the  worst ones to be Peanut Butter, cucumber, and bacon.  The only one that was actually good was the rootbeer.

The kids actually got us to carve pumpkins this year.  it is not a favorite activity of mine, but it got done and we had some very happy kids.  And no one loved their Jack ‘O Lantern more than Crew. 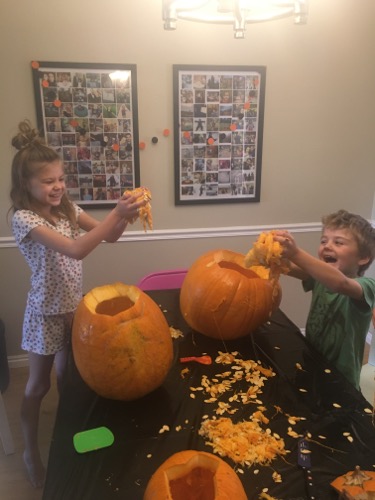 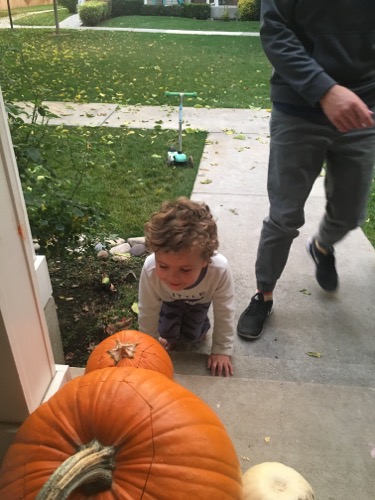 Next Halloween Festivity was a party at Paul’s bosses house. 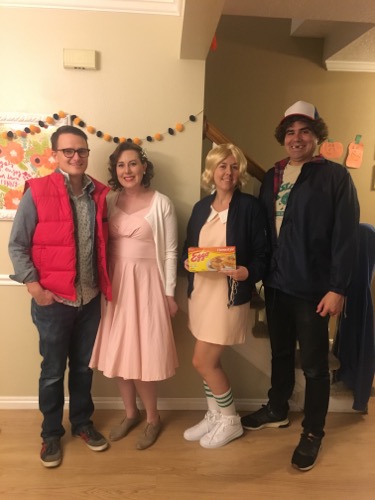 Marty McFly and his mom Lorraine from back to the future. And Eleven and Dustin from Stranger Things. As always the party was very impressive.  Party buses, food trucks, even better portable bathrooms than last year, light up dance floor, and tons of amazingly creative costumes. _ 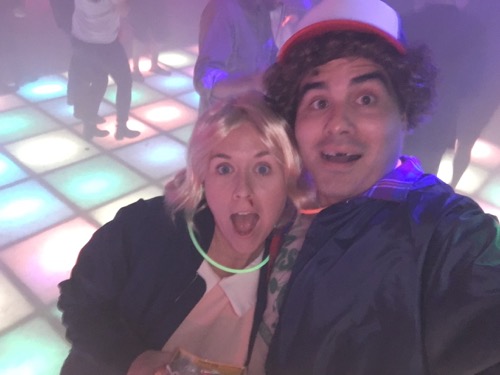 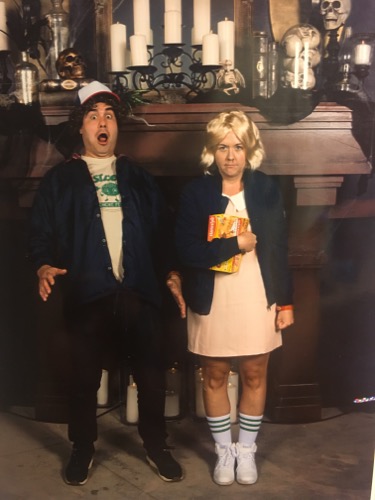 FINALLY,  we made it to the actual day.

We were up bright and early getting kids in costume for school. 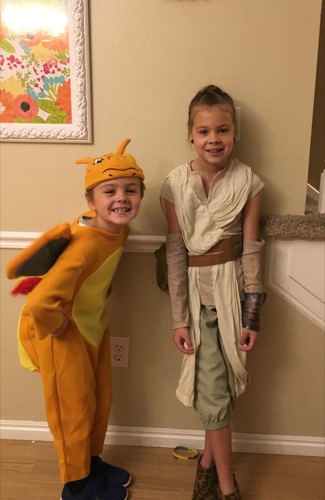 Then there was the Halloween Parade. 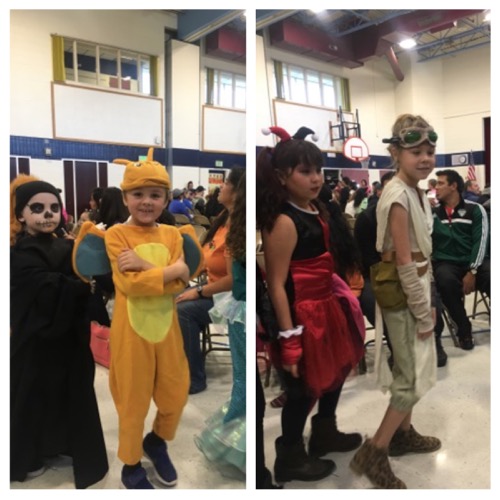 Miles was just smiling and waving away.  And yes, his costume is too small.  I had a tough time with my amazon orders this Halloween. :)  Luckily, he was the happiest pokemon around.

Crew wanted to dress up for the Halloween Parade too (we skipped his preschool party, there was no way to fit it in).  He loved that all the kids in the parade knew who he was and were waving at him and talking about his sweet costume. 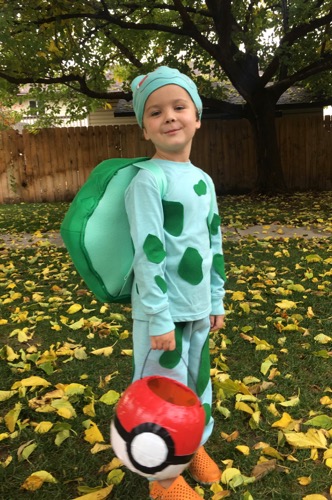 But seriously, have you ever seen a cuter bulbasaur?

Then I ran home grabbed my supplies and came back to do Macey’s class Halloween party. 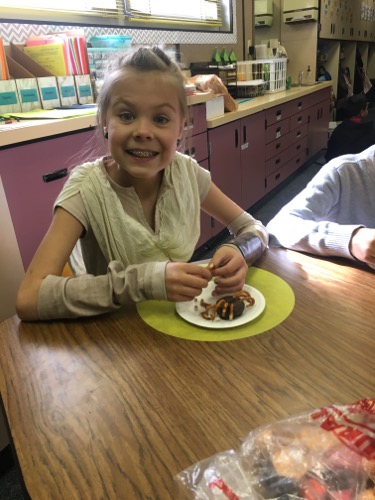 I love getting to see her in her element and chatting with all the kids.

Next stop was the Domo Halloween extravaganza.

It was amazing this year.  So organized.  They had a map for everyone, arrows on the ground of which direction to walk, crossing guards, and themed buildings.  I just loved it. 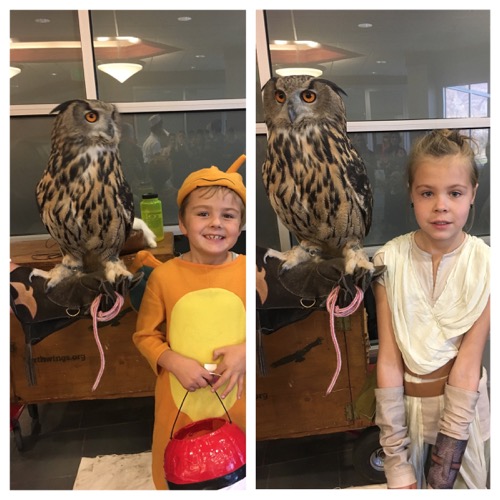 Paul’s building was Harry Potter.  They gave out gummy frogs, bertie botts beans, and chocolate coins. And a real owl, because this is Domo afterall. 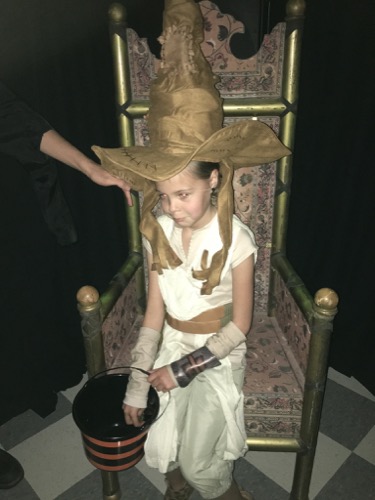 The Sorting Hat put Macey in Slitherin, she was not too pleased.

I actually didn’t take a single picture because it was still so crazy, luckily Paul snapped these ones before it got crazy.

And now we have finally made it to the main event. 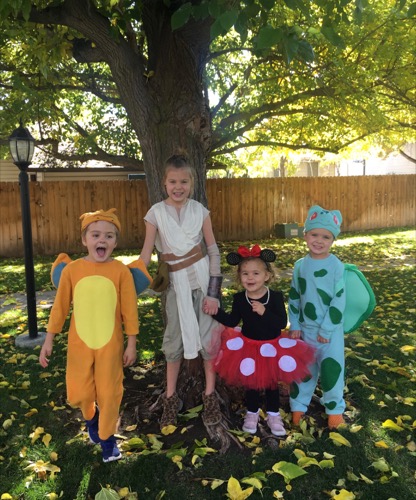 I was so happy with how Ruby’s costume turned out and it was probably the easiest one I have attempted yet.  Plus, she loved it and wanted nothing more than to be Minnie.  Makes my mama heart happy. 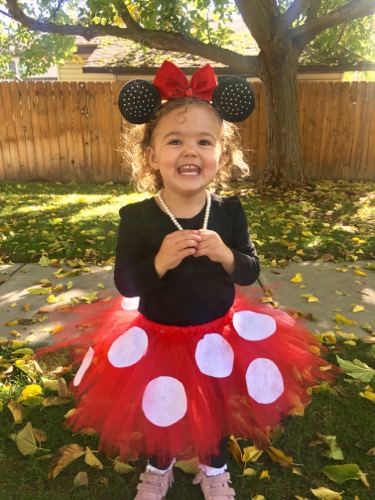 I don’t sew, but I do love hot glueing and taping a good costume together.
And I was so proud of the pokemon ball pumpkins I made the boys too. 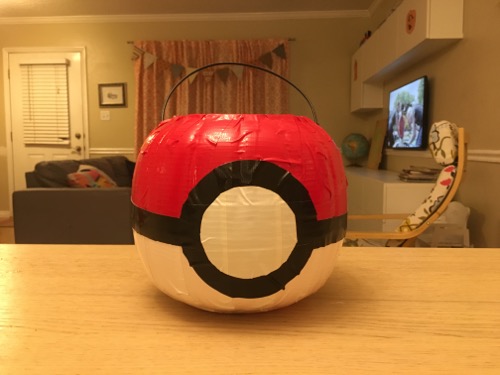 I love trick or treating in our neighborhood and seeing all our friends. 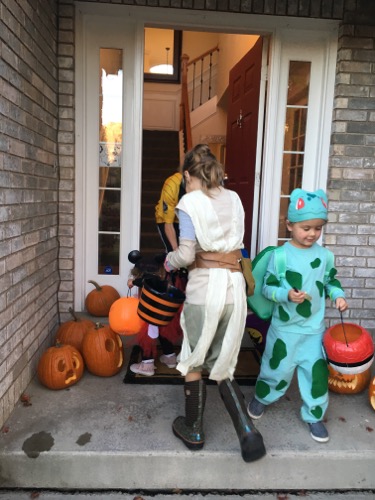 We had a crazy, but awesome,  group this year and I had a few moments of stress, but overall it was pretty much perfection. 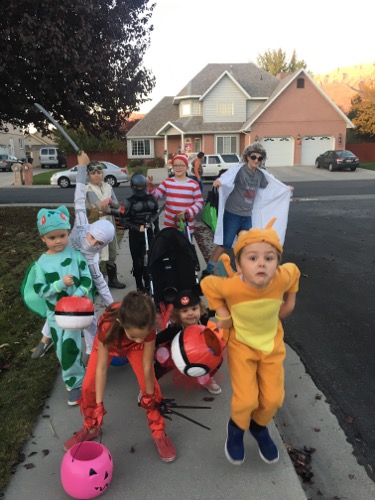 then we finally got to the candy sorting. 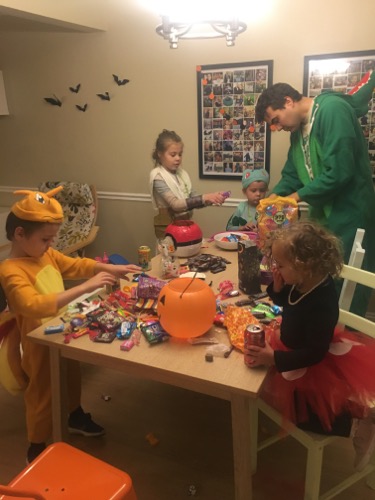 Can you tell what Crew’s favorite candy is?!? 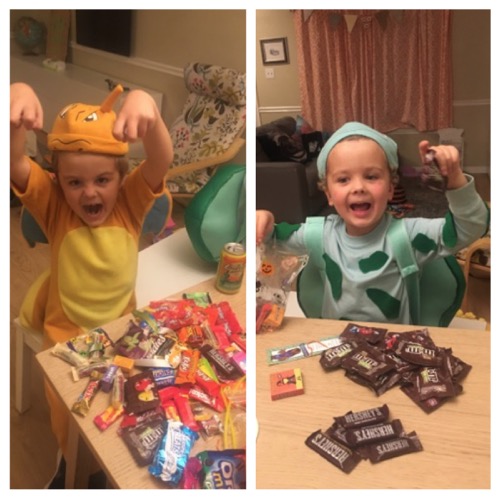 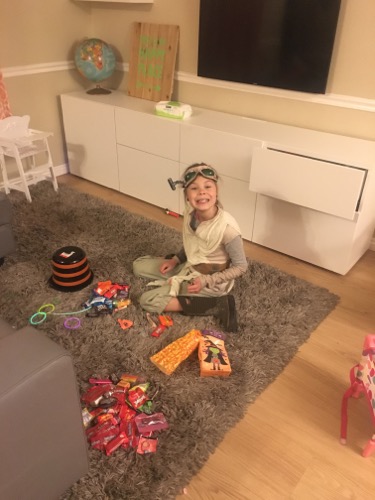 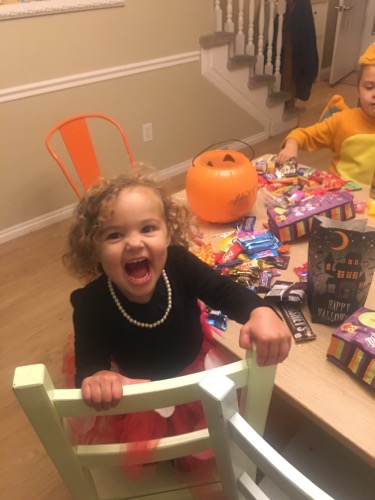 and that finally is a wrap on Halloween.  Yes, this is why I am exhausted.