March once again proved to be up there with my favorite months in Utah, even with such a mild winter, there is just something about spring.

There were of course many afternoons spent at Thanksgiving Point. 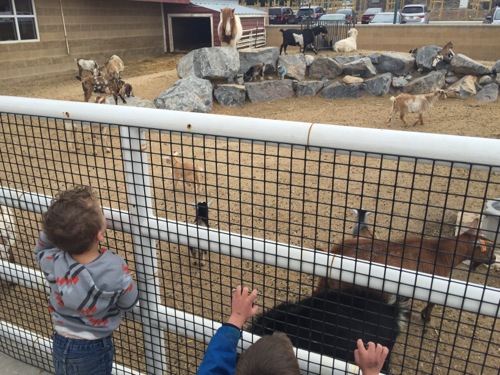 Seeing all the baby animals at Farm Country is always a highlight of our spring.

Since Paul works late every Tuesday and Thursday night, Holly and I hauled the 4 of them there as soon as Macey was out of school. 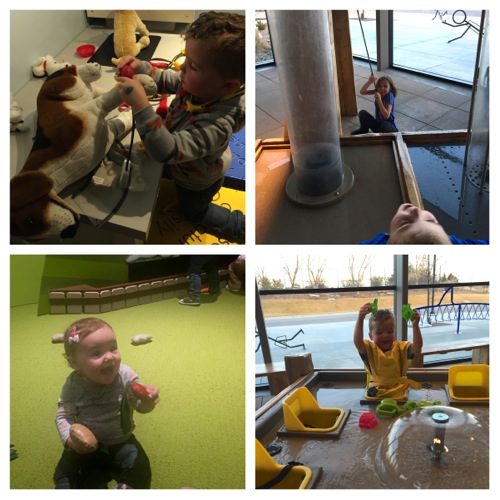 Late afternoons always have way less people, which means I can keep my sanity for much longer than when we visit during the day.  We even had the zipline to ourselves for a few min…it was a miracle. 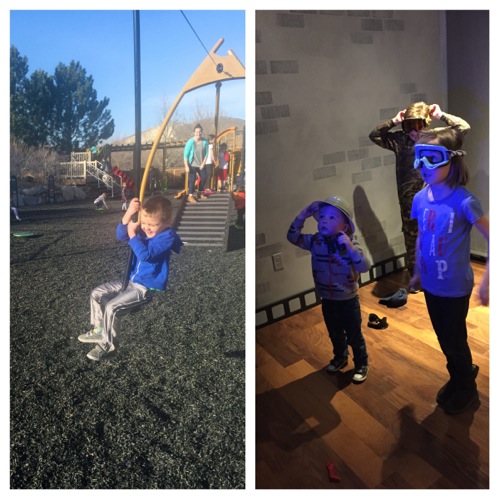 The favorite activity of this trip, besides the always popular jungle area, was the movie making station. 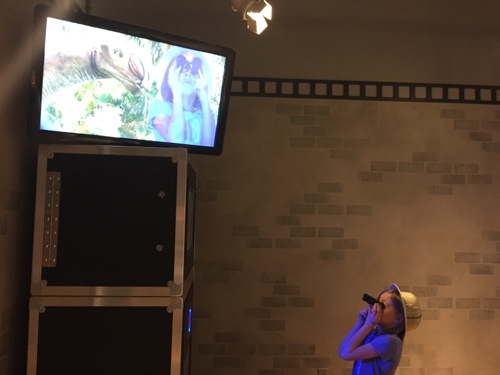 As planned, we wore them out and all 4 kids were sound asleep by 7:30.

This month I have forced the kids to spend countless hours outside. 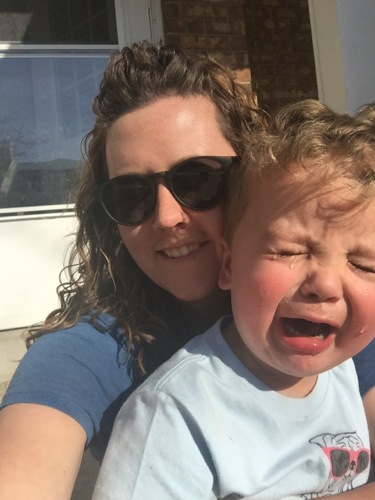 Sometimes though, they really just want to play the ipad. :)

Luckily, they are usually able to find ways to entertain themselves or friends to play with. 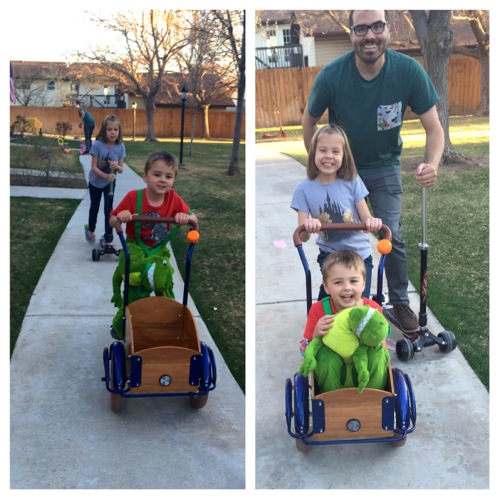 With all the kids coming out of their winter hiding, Pokemon Card trading is back in full force and Miles could not be happier about that fact. 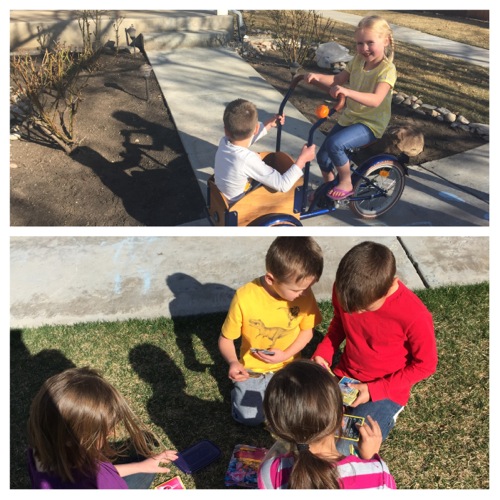 Ruby has been doing lots of walking practice out front with her Mickey Car. She even completed her first lap a few weeks ago. 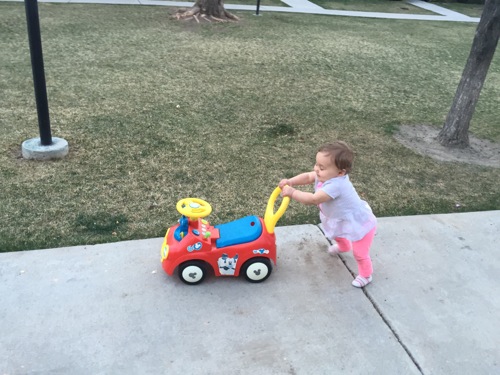 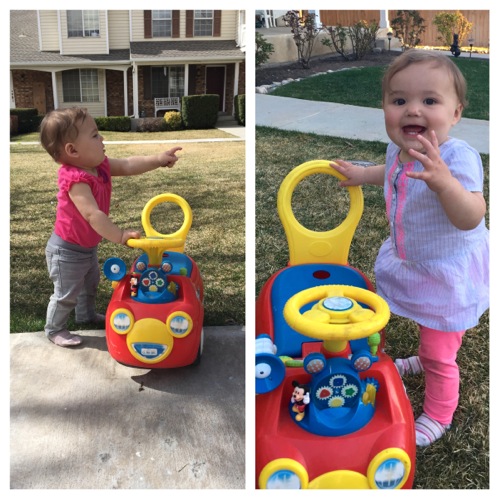 She is still stuck inside more than she would like, though. 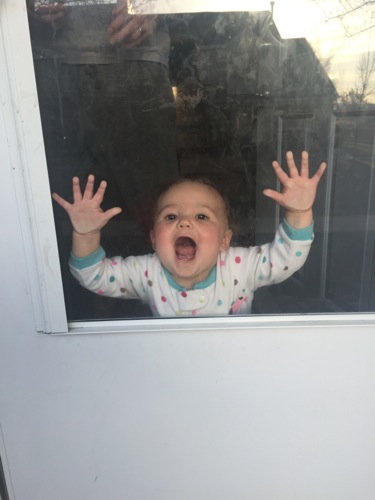 The deck has also gained back it’s popularity.  There have been many meals eaten out there and the deck dance parties are back. 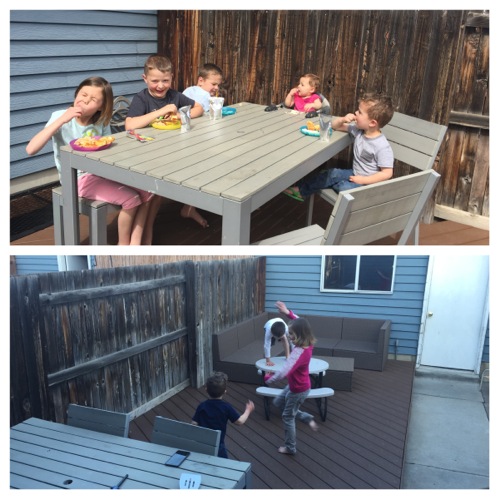 and one day, I even had enough patience to let them paint back there!  It’s crazy what the sun can do to you. :) 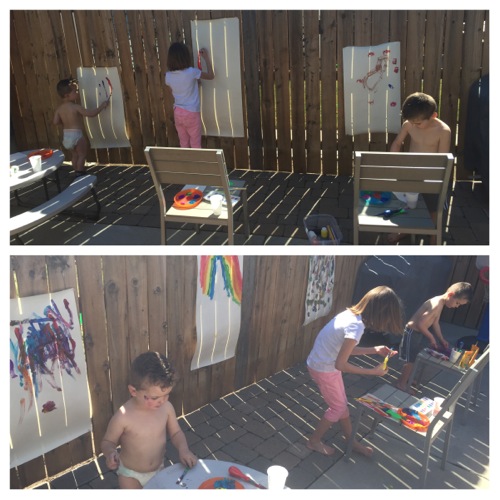 We are currently in a good park phase, as I am no longer completely terrified of Crew falling off of everything and Ruby is still content to crawl around on the blanket eating leaves. 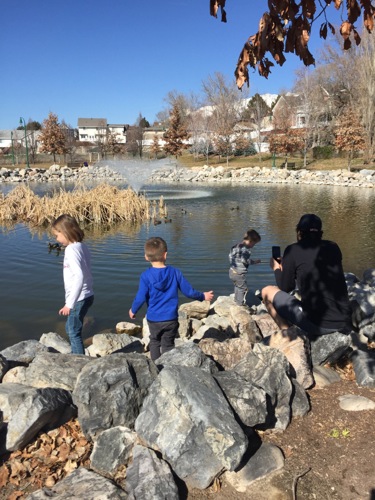 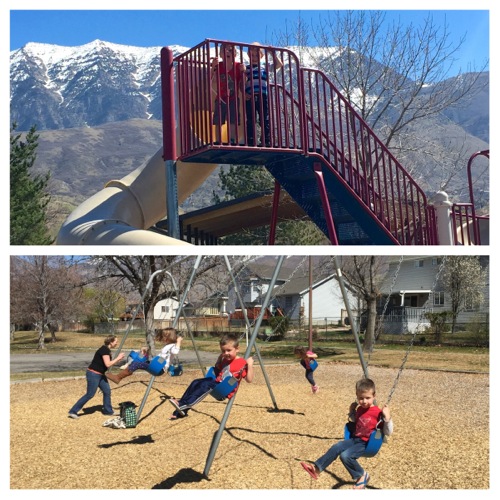 As such, I’ve been trying to take the boys as much as possible, before we enter back into the dreaded toddler park stage… Where I can no longer sit on my blanket and chat with my friends. 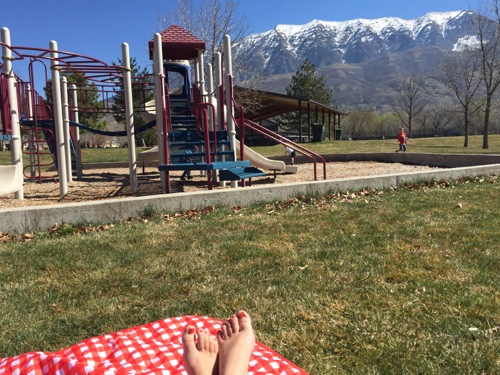 We even hooked up the bike trailer and took Ruby for her first cruise around the neighborhood, she was obviously impressed. 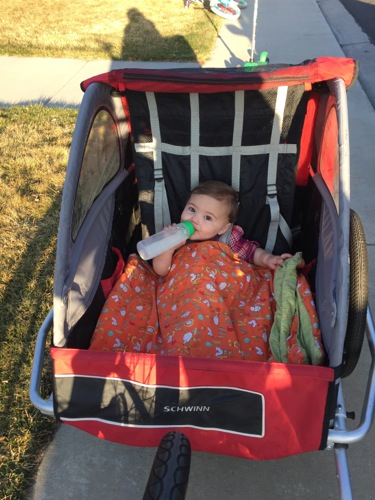 Macey has been busy in 2nd grade.  She’s been plowing through the chapter books and loves sharing all she’s been learning at school with anyone who will listen.

She wrote a report and made a diorama for the 2nd grade animal fair. I learned all sorts of new and interesting facts about Giraffes.  For example, giraffes can run faster than a race horse, but only for a short distance or a baby knows who it’s mom is by her spots. 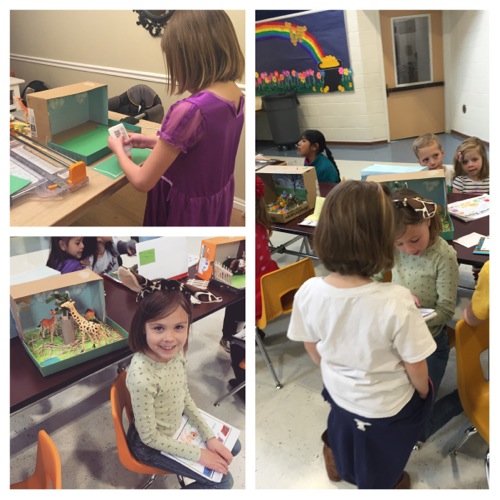 She just seems to have grown up a lot this year and it’s exciting and sad at the same time. 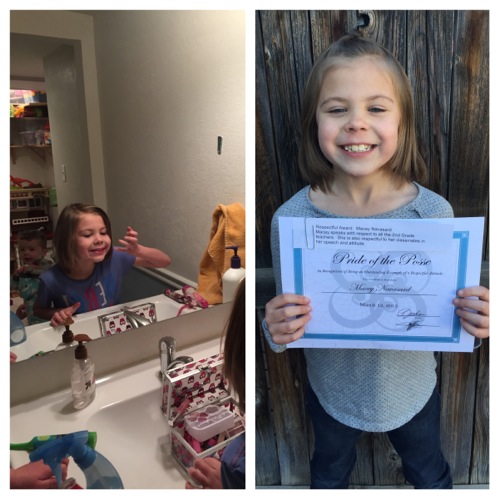 She won a respect award at school and is even learning how to put her lipgloss on with the boys running chaotically around her.

- A highlight of the month for me was gong to see Cinderella with some of our friends.   Macey and I both pretty much loved everything about it. 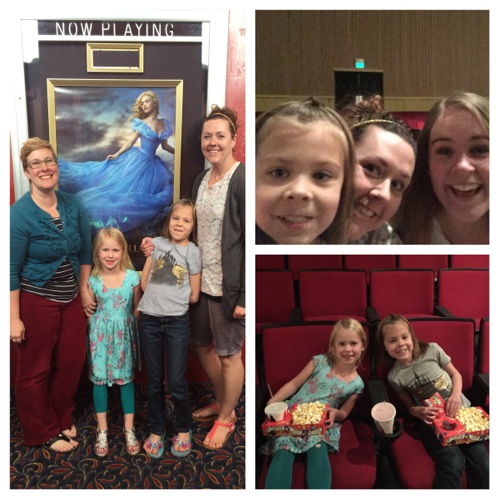 She has also developed a true love of legos this month and tries to sneak upstairs as often as she can to work in peace. 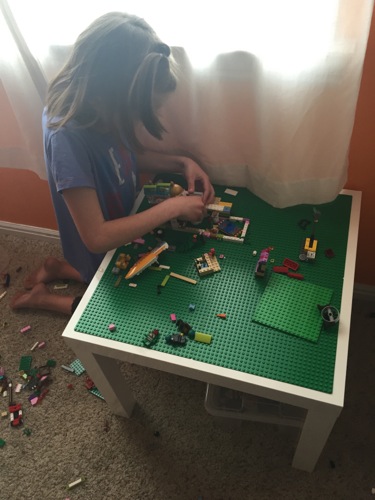 I love this picture…notice the difference in the way their Pokemon Cards are organized. :) 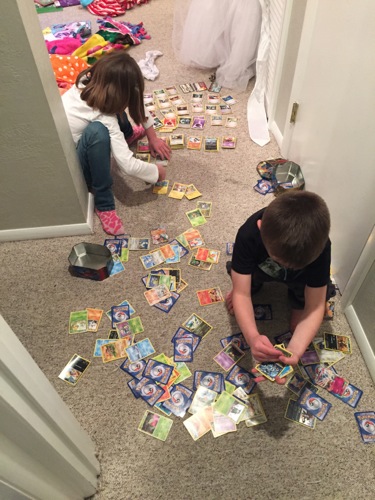 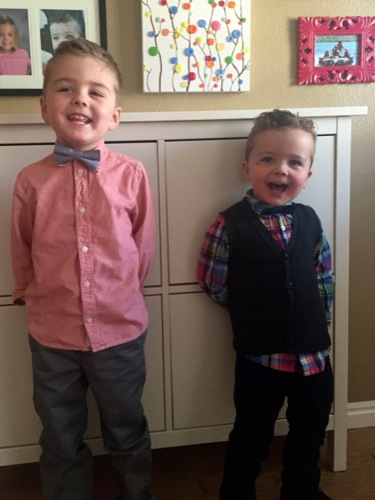 While they still spend most of their days screaming at one another, there are moments when their friendship shows through.  Like how Miles is always talking Crew into doing naughty things or when they sword fight together outside or play pirates in their bunk beds.  There is hope for these 2 yet.

Crew is constantly making me laugh or want to pull out my hair, there isn’t much middle ground with this kid.

Here he is with one of his best friends Liam, never a dull moment. 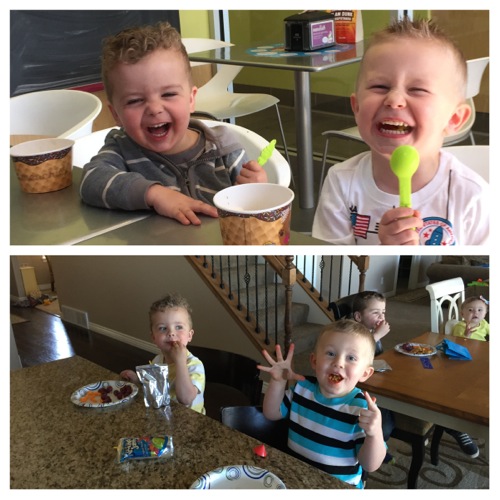 Miles is starting to figure out how I work and is now constantly trying to bribe me with Dr. Pepper.  For example in this picture he is promising to get me a Dr. Pepper if I will download a new game on the ipad for him. 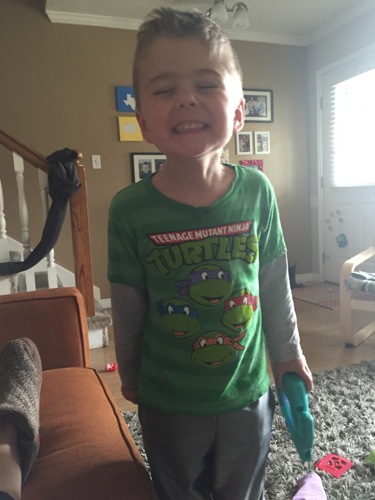 Paul also had a birthday.  The kids made amazing decorations and I actually got him a present this year, so it was a vast improvement from his last birthday. 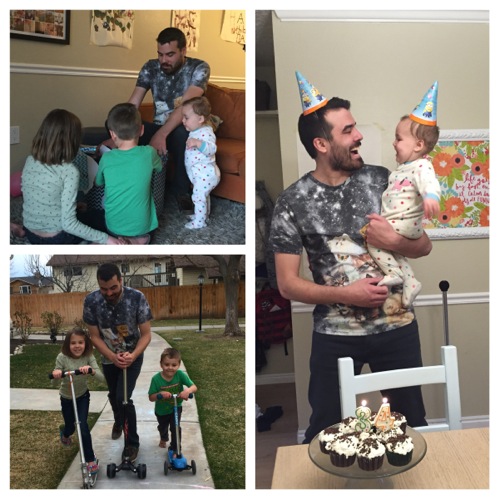 And that completes the novel for March.