I was having a good kid day and then I found an amazing deal on airplane tickets, so I decided I could totally handle flying alone with the 4 kids to visit my family.  :)

I had some serious regret and anxiety a few days later, but it was for nothing, because everything went about as smooth as it could flying with 4 kids alone. 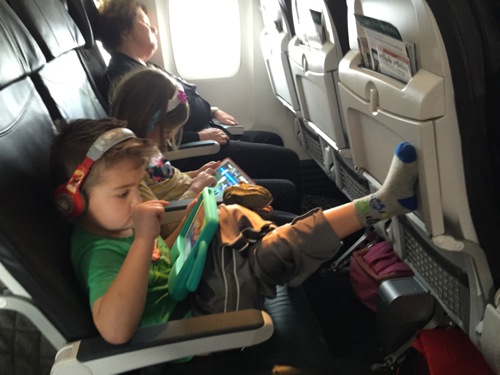 My mom and Paul were both able to go back with us to the gate, which was life saving.  I loaded the ipads up with new games and shows.  And the newish rule of being able to use small electronics the ENTIRE flight, pretty much saved my life as well. 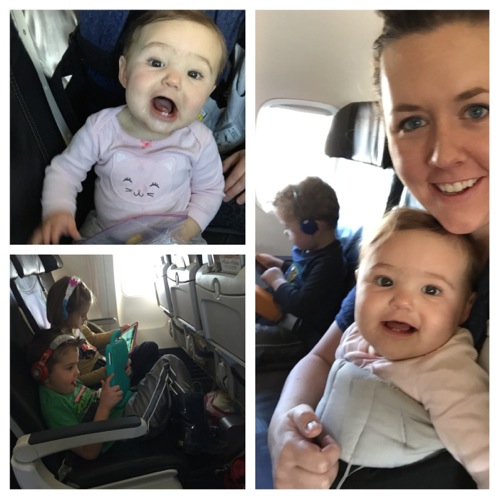 If I didn’t have Miles with me, I would of even been able to take a nap or read a book.  Other than an incidence in the airplane bathroom with Miles though, things really couldn’t of gone smoother.  And once again, everyone we flew with was as friendly as could be, offering me smiles and words of encouragement along the way.

It was a short trip with the main objective being to play with cousins, Nana & Pop-Pop, and The Great Grandmas.

The 3 two year olds were quite hilarious and adorable the entire weekend. 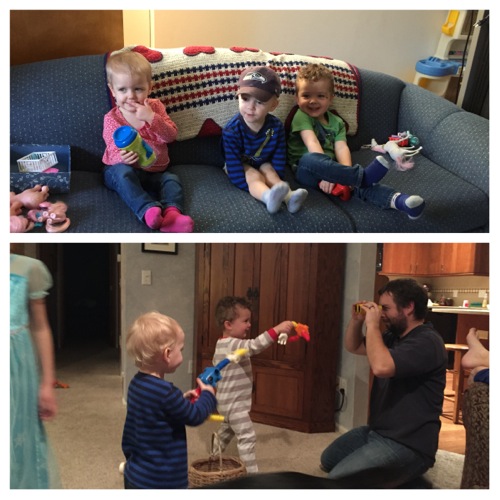 One of my favorite moments was when Shaunna and I taught them how to play Ring Around the Rosie. 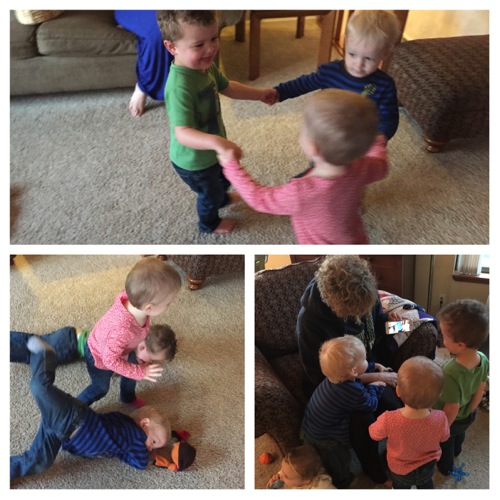 Crew and Mason together have proved to equal trouble.  Anytime it was quiet in the basement someone had to go down to investigate.

They emptied my purse, locked themselves in the furnace room, were caught with metal baseball bats and a hockey stick, and even did some terrorizing of Ashton and Ruby. 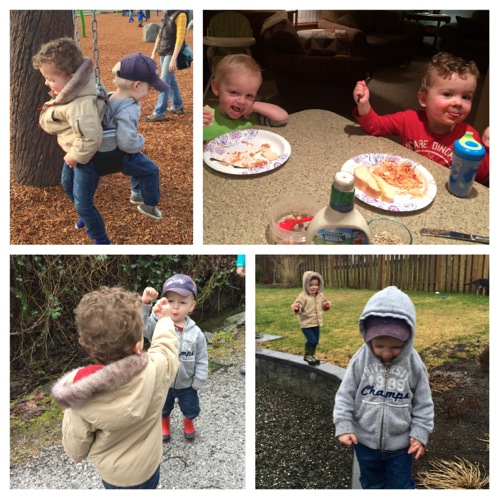 There was also lots of pretend fighting. 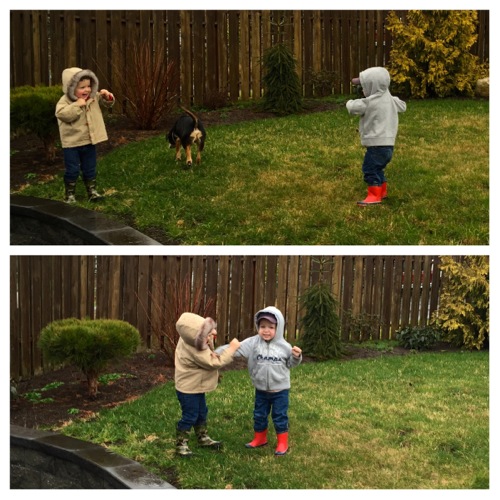 Pretty much they kept us entertained the entire weekend.

Ruby once again was her happy social self. 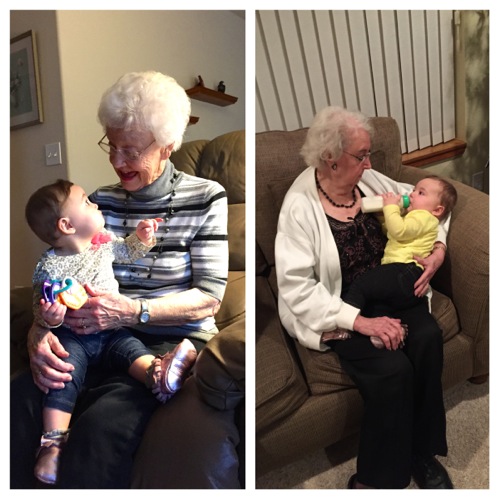 She spent lots of time with Nana, exploring the entire upstairs, playing with her favorite toy (a small basketball), and watching the chaos. 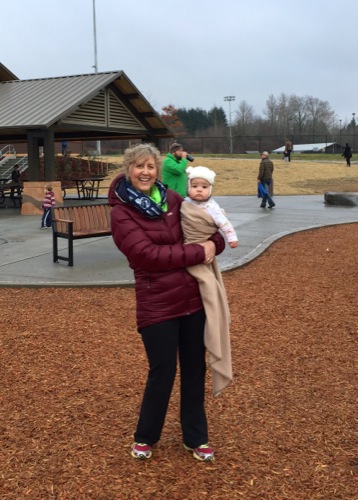 She also learned to wave while we were there, which we all thought was the cutest thing any of us had ever seen. 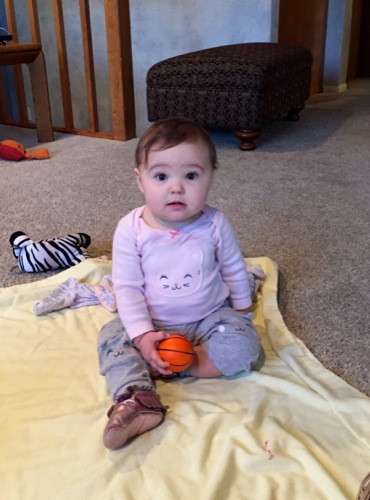 T-Rex got to make the trip with us too.  He loved the airplane ride and pretty much everything about Nana and Pop-Pop’s. 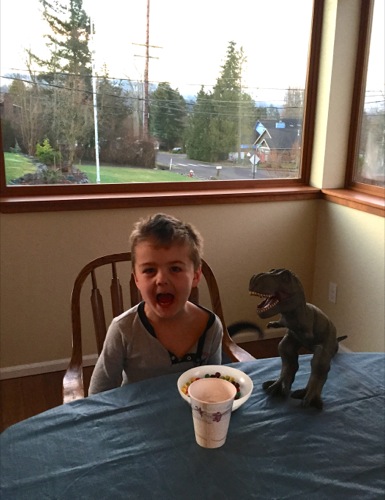 Due to the sleeping arrangements there were some early mornings. 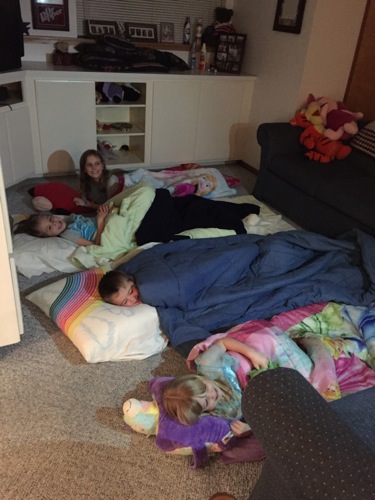 So, my dad and I took advantage and hauled the girls to my favorite local donut shop, Lafeen’s. 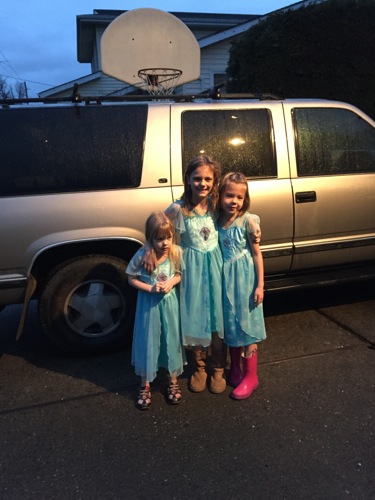 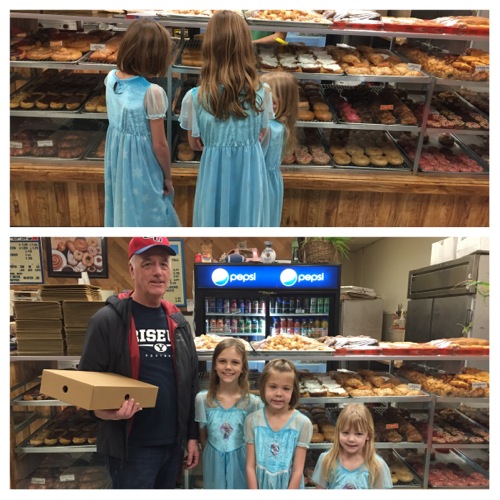 Almost made being woken up at 6:00 am worth it.  And it was just a happy coincidence they all packed their Elsa nightgowns.  Best Cousins.

Since they would go crazy in the house if left contained for too long, we made sure they had plenty of time to run around and get their energy out. 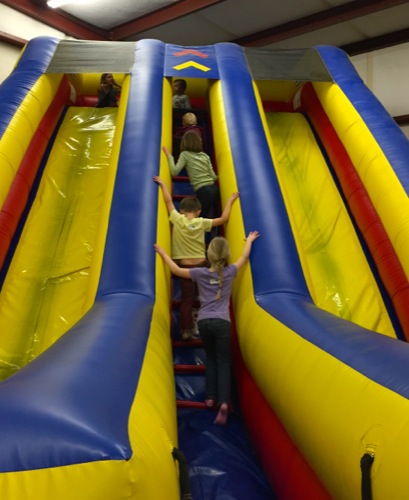 A favorite spot is ALWAYS the trail that runs behind my parent’s house. 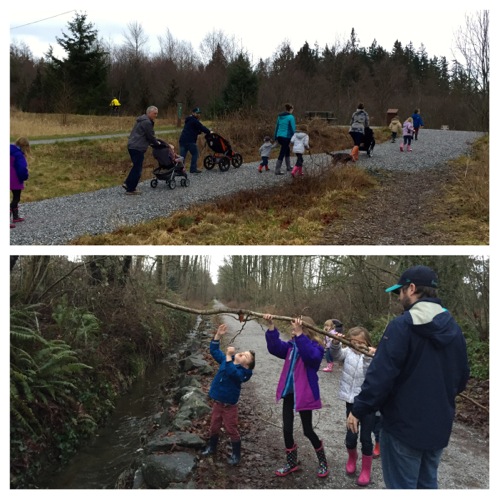 I’m sure we frightened some other trail walkers with our numbers and loudness, but no one seemed to mind too much. 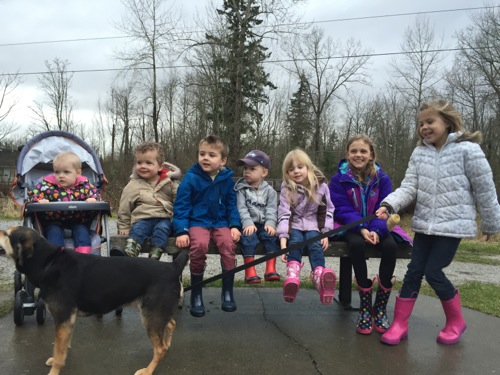 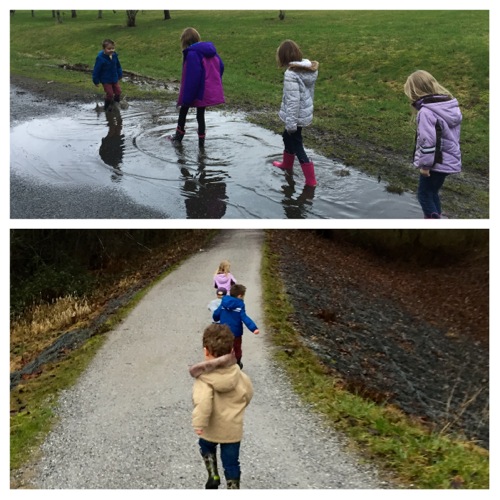 One of my most favorite places. 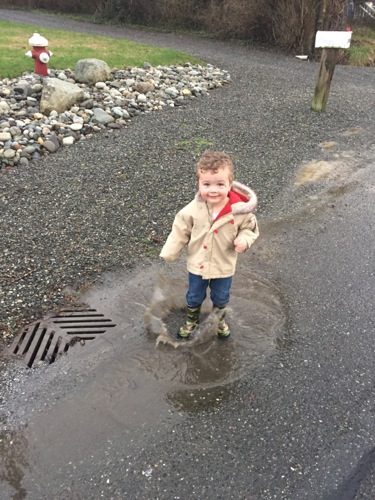 A new park just opened in Bellingham, so the moment it stopped raining we ventured there. 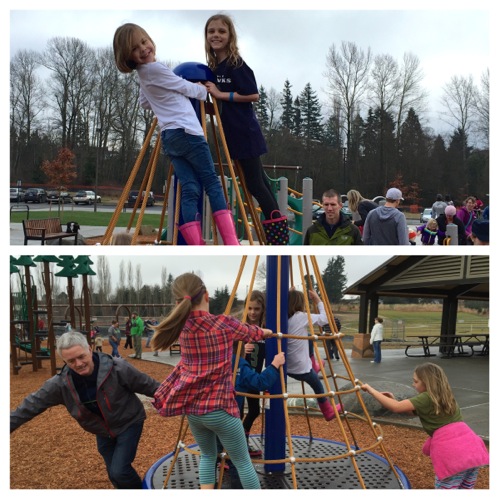 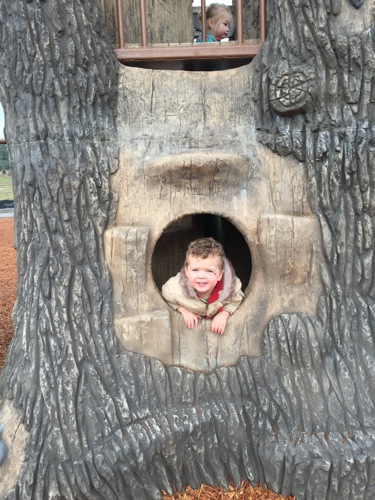 Pop-Pop was a saint and pushed Miles for at least 30 min on the swing.  And I was very happy for the break. 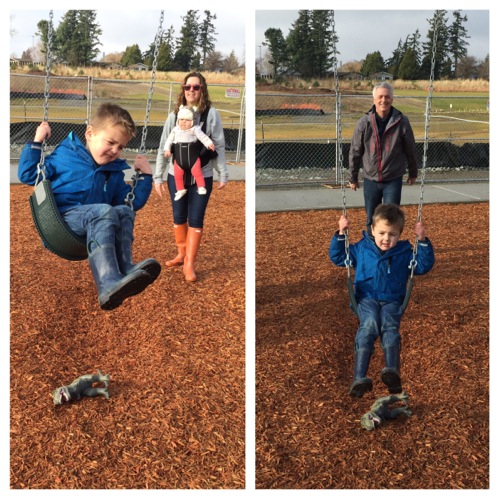 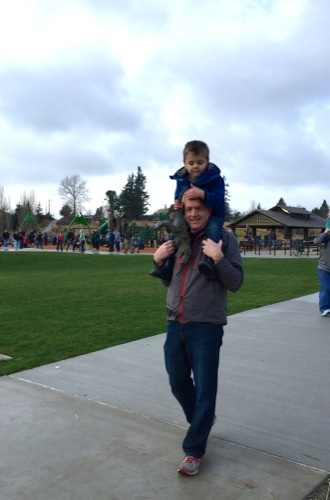 We also had another entertaining cousin photo session while there. 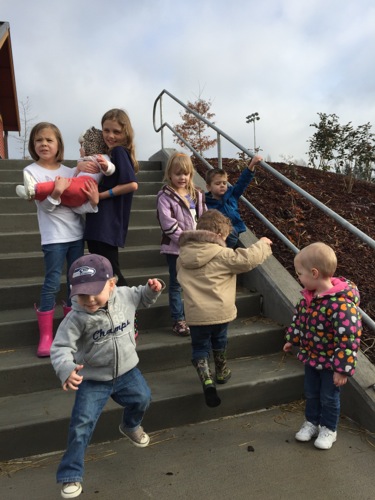 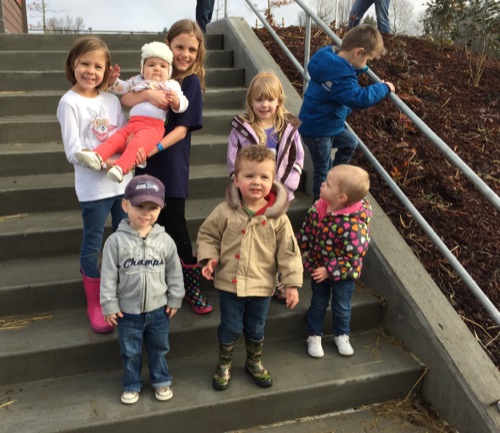 Macey also made sure there was LOTS of game playing happening. 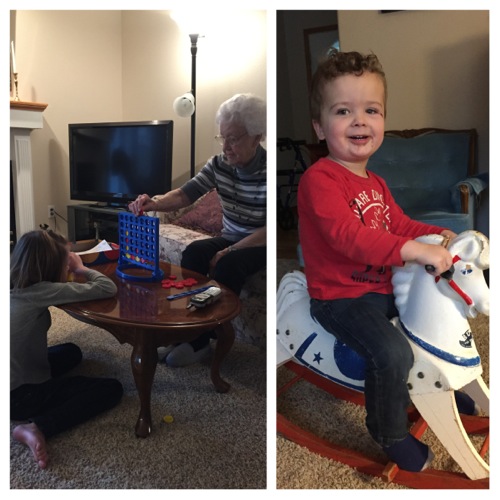 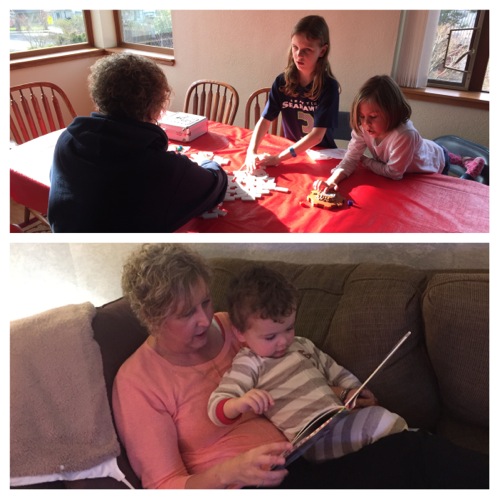 It was very obvious that my kid missed Uncle and Shaunna and were very happy to have some of their favorite playmates back. 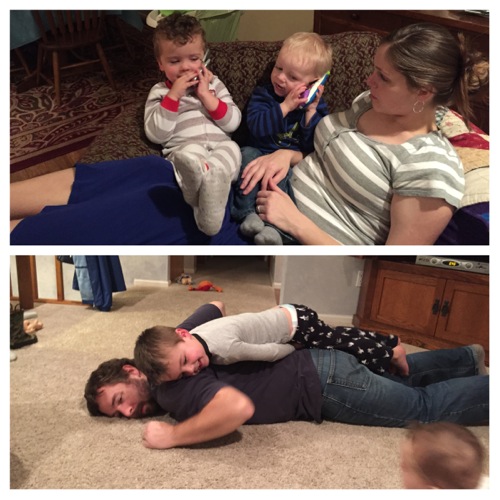 It was a great trip and it feels good to have accomplished traveling alone with the 4 kids and actually surviving it well! 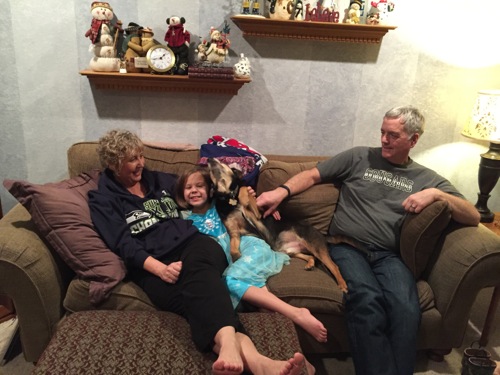 Poor little Macey though, cried herself to sleep the first night we were home because she missed Nana and Pop-Pop so much.  Thank goodness they will be here in a month to ease all our pain.