How did you meet your spouse? We met at our Ward opening social. Emily and I were learning the Hula by where we thought the food line would start. When they announced the pig was done we turned around expecting to be the 1st in line, but Paul and his roommate Steve were already there. So, we ended up eating w/ them and then Paul showed off his X-balling skills. Emily and I couldn’t resist trying and the boys were obviously impressed with our X-ball skills.

Where did you go on your first date? Who asked who out? Technically we didn’t go on an “official” date for awhile, we just did alot of hanging out. I guess I was the one who asked Paul out first. I wanted to go to the Big A** Show because Reel Big Fish was going to be there. I knew Paul liked Reel Big Fish and that none of my other friends really did, so I asked if he wanted to go with me. It wasn’t really a date date, but defiantly a good time.

How long have you been together? We met in August of 2002 and started dating in September, so about 5 1/2 years.

Who eats more? Paul, although I snack a lot more than he does. I just don’t ever eat much at one time and Paul does. 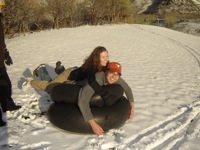 Who said I love you first? Paul. We had just been to the dollar movie and we were back hanging out at his apartment. It was actually the first time I said it right back when someone said it to me, it kinda freaked me out.

Who is smarter? This is hard for me to admit, but Paul is. I’m always having him explain what things mean and he knows tons of random facts. Paul wouldn’t say he’s smarter, but that’s just because he’s too nice.

Who does the laundry? Me! Even when we were both working, laundry was one thing Paul was never allowed to do. He doesn’t know which of my clothes can go in the dryer and which ones can’t.

Who sleeps on the right side of the bed? If you’re at the foot of our bed it’s Paul. But this has changed w/ every house we’ve lived in. I hate sleeping by windows and doors. So, I sleep on whatever side isn’t by either of those. 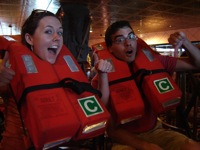 Who pays the bills? Both of us.

Who mows the lawn? Well, we don’t have any lawn to mow yet, just weeds. But, when we get our sod laid this spring Paul will be mowing it.

Who cooks dinner? That would be me now that I’m home. But, Paul is a better cook than me, he just isn’t home to do it most days.

Who drives when you are together? Paul, I hate driving! Even when we go on long road trips I try to drive as little as possible.

Who is more stubborn? That’s easy, me. But, Paul can be very stubborn too.

Who is the first to admit when they’re wrong? Neither of us is very good at that, but I guess Paul is a little better than me.

Whose parents do you see the most? We don’t see either of our parents too often, since Paul’s are in Texas and mine are in Washington. But, we do see mine a little bit more. That’s mostly because it’s easier for my parents to come out here to visit than it is for Paul’s parents. 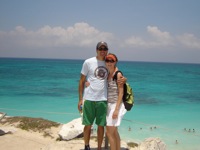 Who kissed who first? Paul kissed me on my couch in Casa Dea. After we kissed he said, “I haven’t done that in awhile” ( I was the first girl he kissed after his mission). He’s so smooth.

Who proposed? That’d be Paul. I flew out to Texas to visit and meet his parents. Pretty much I knew he was going to propose sometime during my trip. But, he surprised me after my red eye flight at the airport w/ a huge orange sign, a dozen orange roses, and a ring.

Who is more sensitive? Me, but don’t let Paul’s tough exterior fool you he’s quite sensitive himself.

Who has more friends? That’s a tough one. When it comes to our couple friends we mostly hang out with Paul’s friends and their spouses (who are now my friends). = ) But, I have lots of girls I do things w/ during the week and I defiantly have more friends I keep in contact with from home than Paul does.

Who has more siblings? We have the same; one brother and one sister

Who wears the pants in the family? Easy, that’s me. I pretend the roles are equal, but in reality I’m in total control. = ) Paul figured it out early, when I’m happy he’s happy.

I tag Brianne, Megan, and Emily!