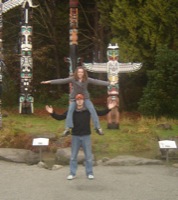 I of course started laughing and it took him a minute to figure out what he just said. I then had to explain that while it may of felt like I was pregnant for a year, a normal pregnancy is 9 months, NOT 12. Apparently Paul should of come to the birthing class with me instead of working late at the office, he needed more help than I realized.